A Stop in the Desert

It is related that early one morning many years ago, while still living in Iran, Dr. Javad Nurbakhsh, Master of the Nimatullahi Sufi Order, awoke and told his dervishes that he would be traveling to another khaniqah across the country, and that all who wanted to accompany him should be ready to depart in an hour.

Urgent calls were made and every car that was available from any source was soon filled with darvishes. They formed a long caravan on the highway, driving through the morning. The Master sat in the passenger’s seat of the first car, and after a few hours, they were traveling through the desert part of Iran.

Suddenly the Master commanded the car to pull over.  The driver stopped by the side of the road, and all the cars behind them pulled over also. The Master got out and motioned for everyone else to stay by their cars. After an hour, he looked in the distance across the sands, but nothing could be seen. Master shaded his eyes with his hand, and after a while there appeared a figure in the distance, walking slowly towards the highway.  When the figure came closer, it could be seen that it was a boy, perhaps twelve years old, and Master called him over.

“Your father is sick,” the Master said.

“Yes!” the startled boy replied. “I am going to find a doctor. How did you know? Who are you?”

“I am a doctor. Here, take this to the pharmacy in the nearby town,” the Master said, and he wrote a prescription on a pad he took out of his pocket.  The young boy thanked the Master profusely and hurried on his way.

The dervishes were astounded. The younger ones whispered questions to each other. The older ones knew better and remained silent.

Dr. Javad Nurbakhsh was a practicing psychiatrist, having both a medical degree and a PhD in psychology.  He joined the Beloved in October of 2008, after having been Master of the Nimatullahi Sufi Order for fifty-five years.

Possible Dreams and a Soaring Impulse!

My friend Dr. Maithri Goonileke of the beautiful Soaring Impulse blog, is a medical doctor that spends part of each year caring for the AIDS orphans in Swaziland.  I consider him a humanitarian and a hero, and when he sent his friends this note on Facebook, I wanted to share it with all the readers of this blog. He wrote:

“Yesterday I had the privilege of speaking to a group of young Muslim children about the AIDS orphans of Swaziland and making a difference.

“Since we launched Possible Dreams International in September of last year, we have raised 40 thousand dollars, started 100 malnourished orphan children on monthly food supplementation, built 5 houses for orphan families, provided hundreds and hundreds who are starving or living with AIDS with urgent medical attention, food/social assistance and basic needs…

“I have been astounded by the compassionate response of people all around the world…. and I am readying now to return to Africa in a couple of weeks…

“Yet still every day there is a new heartbreak, a new child on the brink, or a patient whom I hear is sleeping in the rain or cannot afford his medical or school fees…

“On our Facebook page: www.facebook.com/possibledreamsinternational there is a link on the sidebar of the page called ‘suggest to friends’ …it allows you to send an invitation to as many friends as you would like to join our group…”

Also, you can go to the Possible Dreams International website and read of his work, and if you scroll all the way down you will find a donate button through Paypal.  Please help as you can. It doesn’t matter how much you give. Every dollar can save a life in Swaziland.

“He who takes care of an orphan, whether he is his relative or a stranger, will be in Jannah (paradise) with me… “ – a hadith of the Prophet (pbuh), reported by Abu Hurairah.

No Problem – Looking from God’s Perspective 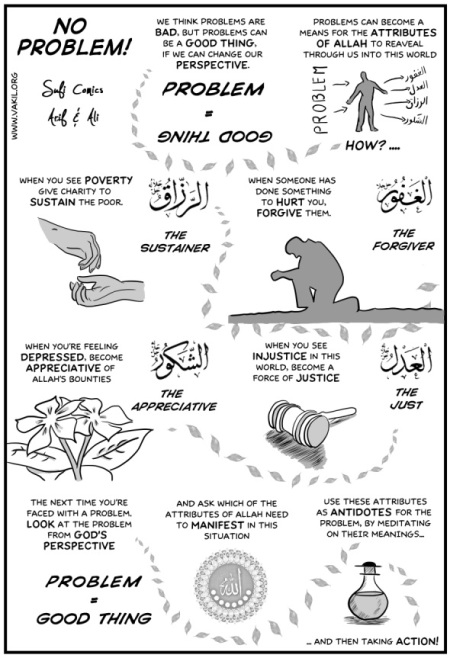 Walking past the worshipper as he prayed came three people: the crippled, the beggar and the beaten. Seeing them he cried, “Great God, how is it that a loving creator can see such things and yet do nothing about them?” And God said, “I did do something. I made you.”

Note:  The spiritual cartoon is taken, with permission, from Arif and Ali’s blog.

“And your very flesh shall be a great poem”

Love the earth and sun and animals,
Despise riches, give alms to everyone that asks,
Stand up for the stupid and crazy,
Devote your income and labor to others…
And your very flesh shall be a great poem.

“Do justice, love kindness and walk humbly with your God.” – Micah 6:8

Note: Rabbi Gershon Steinberg Caudill says: “The ancient rabbis say that these three things encompass all 613 commandments of the Torah

In Praise of Mothers

Who can find a virtuous woman? For her price is far above rubies.
Strength and honor are her clothing; and she shall rejoice in times to come.
She openeth her mouth with wisdom; and in her tongue is the law of kindness.
She looketh well to the ways of her household, and eateth not the bread of idleness.
Her children rise up and call her blessed; her husband also, and he praiseth her.
Many daughters have done virtuously, but thou excellest them all.
Favor is deceitful, and beauty is vain: but a woman that feareth the Lord, she shall be praised.
Give her the fruit of her hands; and let her own works praise her at the city gates.